Across the Continuum Sea


Book Details How to Order Extracts 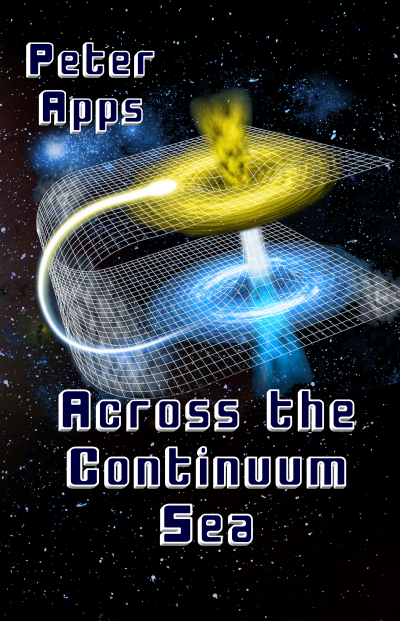 As Dave would say, it wouldn’t be Stuart if life did not get even more complicated, so there’s an alternative Stuart who is in jail doing hard labour, reaching out across the universes for help. Not only that, he finds barriers that he’s reluctant to cross while no-one else even understands what the barrier is.

Enjoy this latest adventure with Stuart and his friends as Dave’s life even gets more complicated than Stuart’s.

SS-Senior-Storm-Leader David Hilford strutted proudly into the restaurant where he was due to meet his mother. He liked his mother so he was unhappy with the coolness between them since he had denounced his father for betraying the Greater Reich. His father considered himself to be part of the intelligentsia and so was entitled to question and examine instructions handed down from Berlin. David knew better. His father’s job as a lecturer in agriculture was to ensure that future farmers of the Reich understood that their duty was to provide as much food as possible.

His father had invited his cronies around for a few drinks and they had settled in their living room. As David had entered the room, they were discussing the terrible slander that the first Great Führer had been incapable of siring children. His father was discussing the rumour that one of Dr. Goebbels children had claimed to be the Führer’s son.

It was too much for David so he had contacted the local Gestapo office. He had been praised for his loyalty so he was believed when he had explained that his mother was not in the room when his father had spoken.

He had excelled in the Greater Reich Youth Movement (GRYM) not being crushed by the harsh training he had received, and willing to be equally harsh on those junior to him. Now he was an SS-Senior-Storm-Leader.

“It’s a living.” Brenda, his mother replied, “Congratulations on your promotion.”

“Thank you, mother.” he replied, noting the lack of feeling behind her words, “I could propose you for party membership now. That would attract some useful new clients.”

“I’ll think about it.” Brenda said, “What about you? Do you know where you’ll be posted yet?”

“No, but I’ve got to report to a Dr. Darren Barker at the Ministry of Science. I don’t know why.”

“Maybe you’re being assigned to security there.” Brenda suggested, “When do you have to go?”

“After lunch.” David replied, “We needn’t maintain this charade for too long.”

“I am pleased for you.” Brenda said, “I’m not angry with you any more for denouncing your father. The more I think about it the more I realise that I never trusted his friends. If you hadn’t said anything we both could have been arrested as well.”

“I reported what I heard because it was my duty.” David said, “I wish that you’d understand.”

“Let’s change the subject.” Brenda said, “Work at the Ministry of Science is something even your dad could respect. Let’s drink to your good fortune.”

They were both uncomfortable with each other and the meal was a gesture more than a pleasure. Dave was glad when it was over, and he could forget the feeling that she was still angry but he had other things to worry about. Despite his claim that it had been his duty and he had spoken up for his mother, saving her, he did feel pangs of guilt. On that day they were suppressed by nervous excitement as he was shown into Dr. Barker’s office, before standing at attention before his desk.

“Take a look at these names.” Dr Barker said, “Do they mean anything to you?”

“No sir.” David replied, “Well, except for mine of course.”

“Who are the Crusaders?”

“I’ve no idea, sir.” David replied, “Sir, I’m a loyal servant of the Greater Reich. I would not tolerate anyone who might oppose it.”

“We know.” Dr. Barker said, “Sit down and relax. I have a story to tell you. It’s an odd one that could threaten the Reich if it’s not a hoax. If it’s genuine, then it’s our duty to turn it from a threat to an advantage. A few weeks ago the police picked up a young man who kept asking when the Crusaders would arrive. He was puzzled that no-one had ever heard of them and he didn’t seem to know anything about the Greater German Reich. He regarded the Great Führer as some sort of monster, and had never heard of the man who saved this country from a futile war and who guided us into a close union with Germany.”

“Lord Halifax, you mean.” David said, “Surely everyone is taught how he persuaded the government not to involve itself in Polish/German affairs.”

“No sir.” David replied, “Well, except for mine of course.”“Apparently not.” Dr. Barker chuckled, “You can read the full police report later but I want you to understand why you’re here. Initially the police thought they were dealing with a drunk and some twisted anti-Reich feeling but suddenly the man collapsed to the floor, screaming in agony, clutching his head.

“No sir.” David replied, “Well, except for mine of course.”“At first, the police thought it was some sort of seizure but as he recovered he started acting like a completely different person. He was suddenly a loyal member of the Reich stating that he had been somewhere where the Greater Reich didn’t exist but was controlled by those Crusaders I mentioned.”

“No sir.” David replied, “Well, except for mine of course.”“He was mad then.” David said, “What’s it called, a split personality?”

“No sir.” David replied, “Well, except for mine of course.”“That’s what the police thought but as a precaution he was sent to the Gestapo in case this Crusader thing was a real organisation.” Dr. Barker replied, “Under interrogation he persisted in the claim that he had been somewhere else but he also produced that list of names.